The Tales We Tell 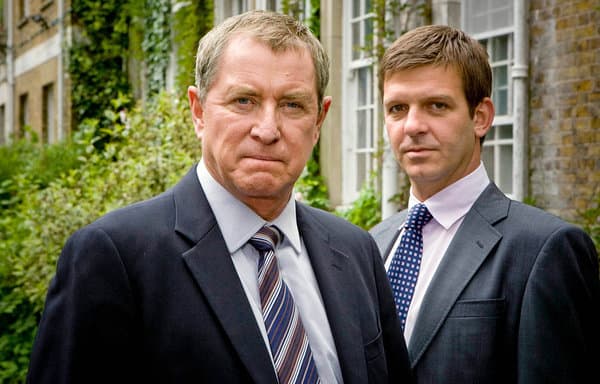 Hi Ho, greetings from the land of springtime! The calendar may state that it is February but temperatures in New York are mild and most definitely confusing the squirrels and my daffodils. This last weekend Marty and I sat in "our chairs" overlooking the lake, a still frozen lake I will add, and enjoyed a glass of bubbly. We marveled at the warm temperatures and the appearance of the sun during a period of time that is normally reserved for grey skies and a good bit of complaining by New Yorkers of all stripes.  We are as confused by our good fortune as the squirrels.

In addition to enjoying unseasonably warm temperature, I am indulging in a new guilty pleasure. I am viewing the British TV murder mystery Midsomer Murders. I think of MM as equivalent of Law and Order because of its longevity though it doesn't require you to view gruesome crime scenes or watch the over the top histrionics of the police. The lead character, DCI Tom Barnaby, deliberately and doggedly works a case until the killer is apprehended. If the viewer actually listens and watches the show, he or she can deduce who committed the crime and why. Midsomer is a true murder mystery in the vain of Hercule Poirot and Miss Marple.

Midsomer has triggered a firestorm of thoughts as I've watched the exploits of the people of Midsomer. If the stories told about life in Midsomer are to be believed then the following is true about life in England.

There is no poverty in England. As a matter of fact everyone has homes, cars and clothes that reflect an upper middle class or above lifestyle. Fox hunting is a weekend event and taking your horse on a stroll through the village is a common occurrence.

Everyone gardens and has encyclopedic knowledge of gardening. Gardens are serious business and if you want to terrorize your neighbor simply cut off the heads of their flowers and leave them scattered on the lawn.

Green space and flora and fauna are sacred in England and if you harm an orchid, cut down trees or attempt to modernized the landscape in anyway, you will be murdered.

There is no modern architecture in England and if you attempt to bring a supermarket or highway into the area, you will be murdered.

The pub and the church are the only two public buildings in the village and if you attempt to change those places in anyway, you will be murdered.

Sexual indiscretion is the plague of the upper class and if you engage in such behavior, you will be murdered.

A gun is not the favorite murder weapon in Midsomer. Bonking someone on the head with a rock, tree limb, camera obscura crank or candlestick is more to their liking. A victim is occasionally shot but the gun of choice in those situations is a hunting rifle. The lack of firearms does not mean you won't be murdered if you engage in an activity that conflicts with the idyllic lifestyle of Midsomer.

One murder invariably leads to a second or third killing but in the end, the killer is apprehended by well-adjusted law enforcement professionals and fairly punished by a functioning court.

Midsomer Murders has led me to question the stories we tell ourselves. Are the tales we broadcast on TV, screen in movie theaters and stock on the shelves in bookstores reflective of who we are? Are the yarns we spin told as cautionary tales in the vain of the Brothers Grimm or are we sitting around our media like we once circled around a fire to hear and see modern day ghost stories? Why do we tell these stories and do they accurately reflect who we are? What do you think? Are these stories that are repeated over and over a true representation of who you are? Of who we are?