Banksy Is On The Loose In NYC 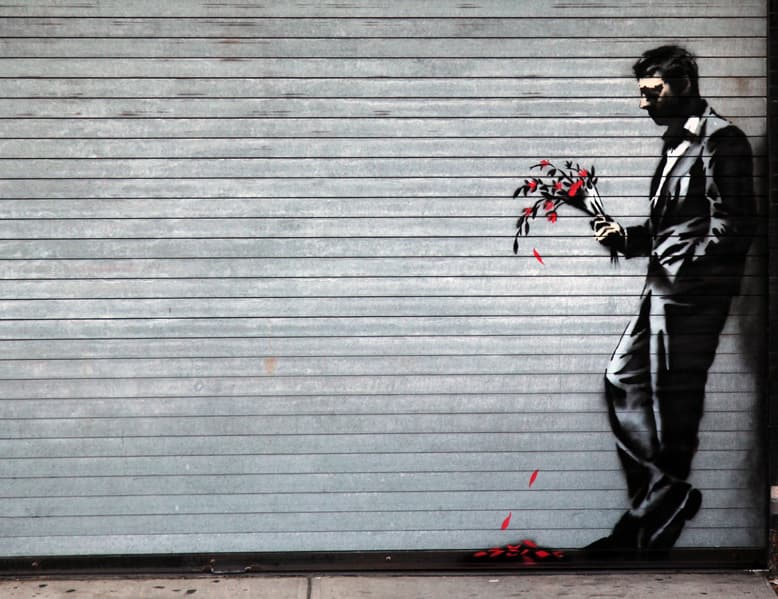 I read 4 newspapers a day. I used to read 5 but the Wall Street Journal became too expense to access just so I could read the eclectic "middle column". I read The New York Times, The Washington Post, The Boston Globe and the Los Angeles Times. Each paper, like the city they reside in, has a unique personality. The New York Times is all about finances and views itself as an international paper more than a local NYC paper. The Washington Post is focused on politics while The Los Angeles Times is all about the Entertainment business. Anything you want to know about the movies, TV, celebrity real estate transactions or the advertising business, The Los Angeles Times has it. The Boston Globe is all about education unless the Boston Red Sox are in the World Series and then The Boston Globe is euphonic in its coverage of the Red Sox Nation.

I tell you all of this so that you get a glimpse into my thinking about Banksy, a British artist that is currently in NYC.  Banksy is an multimedia artist who has taken his art to the streets...and FACEBOOK, Twitter and a website. He has been painting or building whimsical art pieces all around the City.  Here's where Banksy and the New York Times intersect because candidly as artsy as the New York Times likes to believe itself to be, it is still about the finances. The reason Banksy is such a big deal to the New York Times is that his street artwork goes for hundreds of thousands of dollars. The very thing that has gotten him noticed by the New York Times maybe the very thing that makes him stop taking his art to the streets.

Banksy says it is all about the art, not about the money but when his work hits the streets whether in Britain, Israel or in the US, discussion of money surrounds his work. Banksy even captured on video a couple of "neighborhood gents" trying to charge local New York "art tourist" $20 for the privilege of seeing and photographing his work. The police have gotten into the mix; they don't want graffiti art on the streets or buildings of NYC. They are playing a game of hide and seek with Banksy causing him to go dark for a night because of "police activity". Even Mayor Michael Bloomberg wants Banksy out!

I really like his work. It's lighthearted pleasure and feels like a citywide scavenger hunt to find the next piece. Yes, I know that we can't have everyone with a can of spray paint running around the City marking up the place. But Banksy's work is different. It is subtle, yet striking. It is fanciful, yet political. I think it is fun, engaging and wish that the money people would stay out of it and let the rest of us enjoy this citywide art show. So that's what's happening in NYC, what's happening in your town?