Away from the screen and into the woods

Do you ever get the feeling youʼre spending way too much time sitting in front of a screen? I did about 10 years ago and resolved to do something about it, initiating an unexpected journey of transformation and discovery.

Growing up in the suburbs of the South African metropolis that is Johannesburg, City of Gold, I enjoyed a climate similar to Phoenix, Arizona; a short mild winter and a dry hot summer punctuated by massive rolling thunderstorms. This was very conducive to being outside, so as a child I was very active in nature and our family would go camping and hiking a fair amount. I grew a strong connection to the wilderness.

Around 1984 my mom bought me my first computer and I used it to play games and write very basic programs that created patterns or graphics. It wasnʼt till years later after studying design and photography when I got my hands on a Mac Classic computer that the possibility of a career as a graphic designer became tangible. After a lucky break in New York and a few years of hard work I found myself with a solid base of clients and on the cutting edge of computer aided design. Being my own boss I was able to schedule plenty of travel out of the city and back to nature; camping in Redwood National Park, hiking the Grand Canyon, rafting the Colorado, scuba diving in Puerto Rico to name a few.

By the time my 30th birthday rolled around I was noticing (along with the graying of my hair and a decrease in my physical flexibility) that I was spending more time working at my computer and less time enjoying ʻthe blue and the greenʼ. I loved the work I just wasnʼt committed to spending the rest of my life sitting in front of a computer screen. This was when I decided to take my passion for photography to the next level and go pro.

After 5 years in one of the most competitive markets for photography in the world, and many lean months with concerns about whether I had made the right decision, my time time and income split roughly 50/50 between my photography and design businesses. This new venture facilitated increased travel, physical exercise and interaction with people - all positive outcomes, but the thing about running a photography business that no one tells you is that you only spend 10% of your time actually taking photographs. The other 90% is spent marketing, invoicing, estimating, editing, photoshopping, bookkeeping ie sitting in front of a computer screen! I needed another idea.

A couple years prior I had funded and taught a photography program for middle school students in East Harlem as part of a leadership workshop I was attending at Landmark Education. I had learned that I enjoyed teaching, I was especially drawn to that age group (as they are becoming young adults but not yet ʻtoo cool for schoolʼ) and it felt good to be making a difference. It was at this age that a teacher had inspired me in art class, altering the trajectory of my life forever. 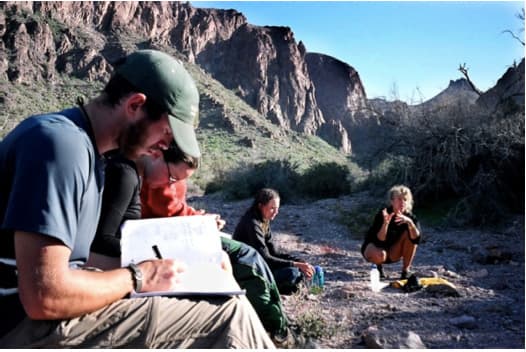 It occurred to me that perhaps I could combine my passion for the wilderness and my newfound interest in teaching. The following year I hiked 100 miles over two mountain ranges in Arizona on a National Outdoor Leadership School course learning education, expedition and survival skills. 5 years and many expeditions and courses later, It is with great pride and anticipation that I am beginning the second year of INTO THE WOODS, and outdoor education and ethics program (cleverly disguised as a hiking and adventure club;) for 30 middle school students at PS214 in The Bronx. In 2009 I wrote a curriculum and was awarded a grant from The Sierra Club as part of their ʻBuilding Bridges to the Outdoorsʼ initiative. We teach leave-no-trace principals, group leadership skills and expedition behavior while exploring local green spaces and community gardens. Once we have a safe cohesive group we ramp up the action; paddle the Bronx River, hike a maze of trails on Hunter Island, and summit Bear Mountain. My vision is to end the program with a 3 day backcountry camping excursion once sufficient funds are available (hint, hint).

One of the rules we established out on excursions is that the students are not allowed any personal electronic devices. I had expected resistance to this, but after a couple of initial murmurs in protest the screens were not missed. In fact by the second trip the students were so engrossed in their experiences, they had to be reminded to collect them from us.

A growing movement of parents and educators around the world are pushing back against indoor screen- time to create a healthier balance. There are plenty of recent studies that point to the multiple positive impacts on mental and physical health unstructured play time in nature has on young people. Not to mention the value of raising a generation that feels connected to and responsible for the environment that surrounds and nurtures them and will determine the quality of their childrenʼs lives. Access to unspoiled nature is every childʼs birthright, and itʼs in all of our best interests to provide it to them.

People ask me if I was concerned about the changes I was making in my life, and honestly on some level I must have been, but being self employed for over 20 years I have learned to live with uncertainty and embrace change. It also matters how one defines success and failure, if you donʼt achieve a specific intended outcome but have fun and learn something along the way, is that a success or a failure? I have found the need to fight the tendency to stand still, frozen by fear of failure. I also try to remember to give myself a break.

On a journey for more outside time for myself, I discovered I had a passion for the wilderness, and a drive to share that passion with young people. Moreover in pursuing a truth, my life was transformed into a healthier, more engaging and ultimately a more meaningful one. It feels like the journey is only just beginning.